The shinobi corps of the Empire of Akino is divided into various units. While they haven't changed a considerable amount to their past counterparts, the Imperial shinobi have adopted various differences that allowed them to field more efficient operatives.

The recruitment for the Imperial shinobi is handled by a small detachment of the Shinobi corps. These recruiters seek out people that have the potential to mould and use chakra. Once that requirement is established, a small investigation starts to see if the person is compatible with the required training to become an Imperial shinobi. This new way of recruiting has allowed the Imperial Shinobi Corps to minimize the number of potential troublemakers and fall-outs to get into the shinobi ranks. And expanding the areas of recruitment, instead of focusing on various established locations.

Though less common, but certainly not disapproved, is when a person voluntary signs up for the Shinobi Academy. In these cases, the person is going through a few tests before they will be either accepted or declined.

The Imperial Shinobi Corps has set up a standard for its new recruits. Though it has reduced their amount of potential recruits, it has already proven to allow them to field more successful operatives.

Once a person is approved to enrol into one of the many Shinobi Academies, they begin their training. Depending on their age, review of the recruiter or results of their entry test, the person is put into a certain class. The classes of the Academies are organised in various ways, to both experiments and optimize the training for most participants.

A difference with some of the foreign shinobi corps, is that the Akinian shinobi don't train in one or two locations. The major Shinobi Academies are located in various key-cities but it isn't unusual for shinobi trainees to be setd to continue their training in other locations - usually in less luxurious posts, such as Imperial military encampments and fortifications.

The training is set into three stages. Each of the training stages is orientated on further moulding each trainee into a capable and competent operative, to be able to meet the future hardships that await them as Imperial shinobi. As expected, each successive stage is more difficult than the previous one. Many suspect it is likely to weed out the weak before they can corrupt the corps.

The first stage orientates on the pure basics. Such as learning about the fundamental chakra control, taijutsu (hand-to-hand combat) and the basics of shinobi tools - such as shuriken, kunai, tags and the sort.

The second stage is focused on expanding the basics. The trainees are taught some more of the difficult Academy techniques. Essential matters such as the basic of chakra flow are taught to the trainees as how to combat basic genjutsu.

At this stage, the class is split into various detachments - based on various factors. Trainees are allowed to advance into the basics of certain specialist classes and trainings - such as medical, barrier, genjutsu and such fields. At the end of this stage, the trainees are put through various tests and examinations before they are enrolled in the military.

The Imperial Shinobi corps has recognised that specialists can provide a wide range of services in the field. Whenever a certain trainee provides evidence that they have a certain talent, this is being focused upon - together with experts to properly guide and teach the basics to the trainee.

The Imperial shinobi corps provides a range of equipment to their operatives. The usual flak jackets, pouches with various tools - like shuriken, wire, tags etc - are as common as they are within other nations.

The designs, for the regular shinobi, can be seen on the image to the right.

The Akinian shinobi corps has been one of the best-funded shinobi corps in the known world. Having experimented with various designs of flak jackets, they have issued a standard Akinian flak jacket for the regular shinobi teams and ranks. They kept in mind the flaws and advantages of previous designs, coming with their new, Imperial design that is to both provide decent protection and allowing mobility.

However, the Akinians have invested into some more utility equipment to allow their operatives to engage in their operations more efficiently. One of the prominent equipment that the Akinian shinobi have used for some time is their earphone communicator. The small device allows the Akinians to communicate across three different channels while using a small bit of chakra to run the devices. Though the tool isn't that rare or revolutionary as other countries use their own form of communicators, the Akinians have developed various methods of decrypting and encrypting their messages. 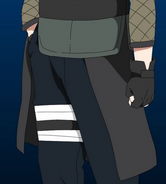 An Imperial Akinian kama. A recent accoutrement that has gained some popularity among various Imperial shinobi. Originating from both Uchiha and Hon half skirts and kilts, the Akinian kama is both a fashion statement as serving light protection against various light projectiles.

A close up of an Imperial blue sash - worn by squad leaders and officers.

Promoting flexibility, various individuals favour wearing additional protection. Though it requires permission from the leading officer as not going against various policies, this has led to various units to adopt various cultural traits of their clan or origin. 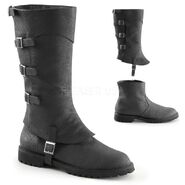 A typical Imperial boot, worn by many soldiers and operatives. Designed to combat various problems without limiting the wearer's manoeuvrability. The thick sole alone allowing more protection than the usual shinobi sandals.

A typical regional addition is the Amegakure raincoat. Due to the nearly constant rainpour, many operatives are allowed to wear raincoats over their gear.

An important part of the Akinian shinobi garb is the 'blue sash'. While many consider it a mere fashion statement, it is a sign of leadership within a squad. There can be various markings on the sash that can desginate the individual's team achievements or their origin. Thus while only the squadleader is allowed to wear it, being usually seen as the pride of the entire team.

But it also serves a functional purpose. Allowing other teams quickly to recognise a squad leader and in absence of one of their own, knowing who can give out orders. During some operations, the sash isn't garbed by the squad lead. These are usually operations in which the sash might get in the way or can't be seen anyways - such as incognito operations or during night raids, assignments and etc. To prevent it from falling off, the top and bottom are pinned at the individual's gear.

The 'age' of the shinobi sandals are gone for the Imperial operatives. Whereas many are aware that an army marches on its stomach, the Akinian military is quite aware that their marches march much better when they aren't suffering painful blisters or can't grip a good footing with their boots.

For this purpose, the standard kit has special designed socks to prevent blisters - designed by the age-old trick of the Cho clan to avoid friction during moving of the feet in the boots, which in short can cause nasty blisters with the addition of sweat or any moisture. The sole of the boots are reinforced and designed to allow better gripping as muffling some sounds of feet movement.

Due to the various regions, the Akinian shinobi corps has adjusted some of their teams and units. Allowing them to utilize various equipment that isn't part of the standard gear but will serve them well. Such as raincloaks in the Rain province or allowing to change the camo of their flak jackets. Though permission is still required by various higher ups.

The Imperial Shinobi can be separated into various organisations and units. Each with usually its practices and equipment. Not all of these shinobi specialists focus a considerable amount to combat skills or purposes. Some of these Imperial shinobi units and organisations are simply tailored to aid Imperial bureaucracy or enhancing local authorities capability to deal with corruption or crime.

A distinct garb of the Intelligence Division agents. These operatives wear the jacket without additional changes upon it - save it for the need to adapt slightly for the current season or region's climate.

Though the Hokage Guard of the Lord Third has been disbanded for years, their uniform was considered one of the best. Both in regards to protection and providing utility. The signature shoulder cloak being one of the most notable features.
Community content is available under CC-BY-SA unless otherwise noted.